Persia Reframed: Iranian Visions of Modern and Contemporary Art is a tour de force by the curator and scholar Fereshteh Daftari, whose prolific career began in the late 1980s. For her PhD dissertation, later published as a book, Daftari argued that Persian art served a ‘liberating role’ for iconic modernist figures such as Gauguin, Matisse and Kandinsky.1 She stated that these artists ‘derived their innovative styles from features which the Western canon was inhibiting but which they saw as being confirmed and embraced in the East’ (xii). In the following years, the significance of Persian and Islamic art within the Western canon continued to shape Daftari’s curatorial vision, which steadily placed Persian art at the centre of artistic discourse. This transpired first during her tenure at the Museum of Modern Art, New York (1988–2009), and then through a series of major independent curatorial projects around the world.2 Daftari’s curatorial practice and research also extended into a rich corpus of writing on modern and contemporary Iranian art, including the book under review. Extensively researched and generously illustrated, Persia Reframed is divided into six chapters that advance chronologically, from the turn of the twentieth century to 2018.

Daftari’s study loosely frames concepts that capture aesthetic and ideological preferences, stylistic themes and genres. These include spirituality, morality, calligraphy, Saqqakhaneh (a mid-century artistic movement inspired by coffee-house paintings and religious paraphernalia), formalism, appropriation, gender, Westoxication (a term popularised by Iranian intellectual Jalal Al-e-Ahmad, which refers to the harmful consequences of Westernisation) and a host of other frameworks that signify artistic involvement with socio-political issues. This malleable configuration is evident through the overarching themes of the chapters; their titles (‘Modernism(s): Contextualizing the Terms of Discussion’; ‘Tanavoli in Context’; ‘Abstraction to Figuration: The Politics of Morphology’; ‘The Tip of the Iceberg: Contemporary Art in and Out of Iran’; and ‘Introducing Iranian Art Abroad: A Cultural Perspective’) do not align with one another in terms of subject-matter, theoretical frameworks or scale. For example, whereas chapter 2 is centred on the artistic career of a single artist, Parviz Tanavoli (b.1937), chapters four and five take the reader from abstraction and figuration to a particular locus – Tehran – as a visual theme in the works of artists such as Arash Hanaei (b.1978) and photographers like Newsha Tavakolian (b.1981). Then a single object – the carpet – animates a section in chapter five, in which the role of this cultural item of daily life is emphasised across a variety of artistic media. Although in its entirety the book might be overwhelming for some, each chapter (or even thematic sections within a chapter) can be read independently, making Daftari’s publication exceptionally valuable for teaching.

Owing to her career as a curator, the content truly excels when Daftari’s focus shifts to curatorial processes and exhibition politics. For example, in chapter three, Daftari turns her attention to a major change in staging statues in Iran’s urban spaces (pp.42–47). Until the late 1960s, public sculptures were largely conceived as figurative monuments and memorials to great men, securing nationalistic ideals of the governing elite. In this vein, Daftari recalls the iconic Ferdowsi statue by sculptor Abolhassan Sadighi (1894–1995) FIG. 1, comparing it with its less celebrated counterpart, produced in Tehran, c.1960, Farhad and the Deer, by Tanavoli – a statue made of metal scraps found in a junkyard FIG. 2. It shows the distorted figures of a man and an animal, reminiscent of the relief of Darius fighting a lion found in the west entrance to the Palace of Darius the Great (650–486 BC). Although visually entrenched in Iran’s cultural heritage, such an unusual approach to form was dismissed and rejected by the authorities. As such, the public visibility of Farhad and the Deer was reduced to a display on the balcony of Tanavoli’s studio, which nonetheless faced a busy street. Tanavoli’s interventionist tactic was daring for its time.

Daftari makes another interesting comparison when she elaborates on the career trajectories of Sonia Balassanian (b.1942) and Shirin Neshat (b.1957), focusing specifically on the exhibition, perception and display of their works in New York throughout the 1980s and 1990s (pp.132–36). Daftari provides an informative array of details regarding the connections between the two artists’ practice. Specifically, Daftari uncovers the lesser-known story of how Balssanian pioneered the iconic image of women in black chadors through a series of multimedia exhibitions at New York's Elise Meyer and Franklin Furnace galleries FIG. 3 FIG. 4.3  Titled ‘Introducing Iranian Art Abroad: A Cultural Perspective’, the final chapter of the book acts as an invaluable biographical sketch of Daftari’s career FIG. 5 FIG. 6. Her anecdotal references, which include discussions with such iconic figures as Oleg Grabar and Homi Bhabha regarding the links between historic and contemporary art of the Middle East and colonialist and orientalist views respectively, are noteworthy.

Some might experience a few minor challenges in this otherwise extremely rich and reader-friendly book. For example, the overambitious coverage of more than one hundred artists precludes an in-depth analysis of some artistic careers and related theoretical discussions. In addition, throughout the book there is a consistent effort to tangentially allude to similarities between Iranian artists and selected artists from around the globe – from the late Brazilian multimedia artist Lygia Clark to the Belgian painter Luc Tuymans. Readers with a knowledge of art history will likely take more from Daftari’s assertions than those who are new to the topic. Lastly, perhaps because Daftari has spent most of her professional career outside Iran, the artists she features in the book are predominantly those with a track record of international exhibitions. Lacking are Iranian artists who work on ephemeral performances and site-specific projects. Due to the nature of their work their careers have largely expanded inside Iran and their audiences are predominantly local. However, these issues do not detract from the value of this important study. Persia Reframed presents an instructive examination of Iranian art across several formative decades. Weaving together a tapestry of artistic works from many generations, Daftari presents a vast array of conduits and forays into the story of Iran’s modern and contemporary art. 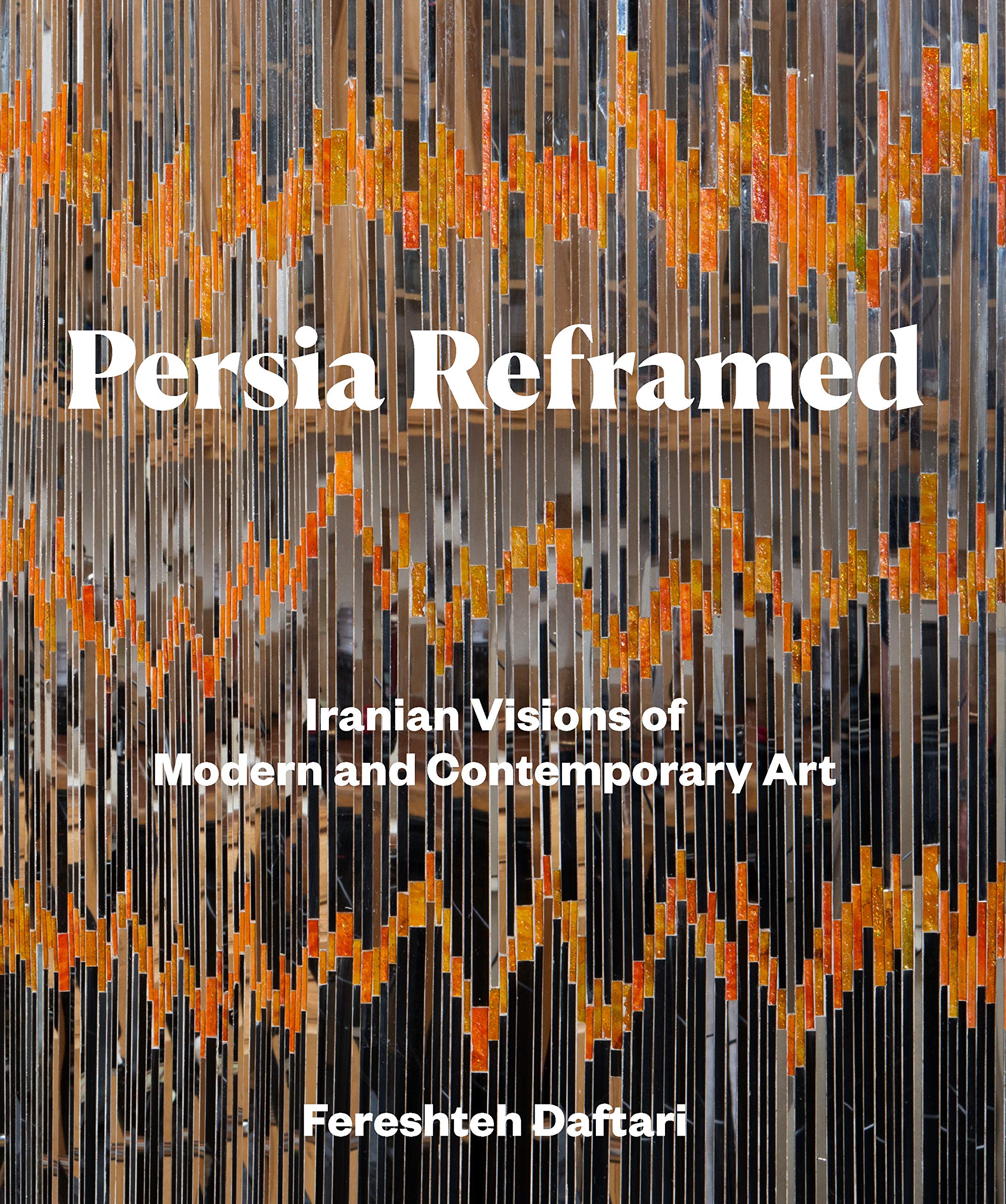 is an associate professor of History of Art and Architecture at the University of Massachusetts Dartmouth. She is the author of Domesticity and Consumer Culture in Iran (2013) and co-editor of Images of the Child and Childhood in Modern Muslim Contexts (2012), Reinventing the American Post-Industrial City (2015) and The Destruction of Cultural Heritage in the Middle East: From Napoleon to ISIS (2016). Karimi’s forthcoming monograph explores contemporary alternative art scenes in Iran.